On December 18, 1837, Robert Pollock Davison and Ellen Priestman obtained a special marriage license (according to Simon Molyneux). They were married on December 23, 1837 at St. Anne's Church, Limehouse in Middlesex County. The fact was reported by the London Morning Post on January 5, 1838:

The marriage certificate requested from the General Registration Office of UK, for £ 9.90 confirms this information. Luckily civil registration in England began only from the year 1837, which is exactly the year they were married. 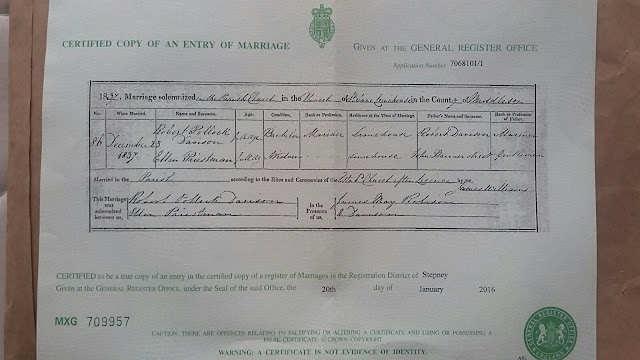 Marriage certificate of Robert and Ellen


In 1838, Capt Robert Pollock conducted a group of 285 immigrants to Australia on the ship Lady Kennaway as assisted bounty immigrants. Assisted bounty immigrants were free people who had been selected by an agent, reeived free tickets to Australia and some assistance was given to help them in their new life in the colonies. This was the way to ensure that young immigrants, especially from the working classes or trader who could colonize the new country that desperately needed work to ensure its growth. In this group were the Scots John Hellmrich, Margaret Mathieson and their six months son John, as explained in the Yews to Eucalypts website.

However, the book "The Asiatic journal and monthly register for British and foreign India, China and Australasia" volume 26 tells that the departure of the vessel on April 25, 1838 took convicts ("Lady Kennaway, Davison, for NS Wales with convicts").

The site Passenger Ships Arriving in Australasian Ports shows the arrival of Agnes passenger ship at Botany Bay, New South Wales (Australia) on February 13, 1842, at a time when Robert was captain of this ship. The website states that the information was obtained from an immigration agent list called Bounty Immigrants from November 1841-September 2, 1849 (2135 film).

Reinforcing the previous data, the newspaper The Sydney Herald of February 14, 1842 announces the arrival the day before of the ship Agnes commanded by Capt. Davison, with 228 immigrants. The ship sailed from Liverpool on November 1st. The same newspaper on April 25, 1842 announced his departure on the Saturday to Guam (Micronesia).

On board the ship Dyofre, Robert traveled to the island of Ichaboe in southern Africa.

An incident involving disorder of two sailors and their punishment was reported by British media on August 28, 1852, in the newspapers Cardiff and Merthyr Guardian (below) and Silurian Cardiff, Merthyr:


My father says that Robert used to smoke a large pipe in the shape of a shell, which looked like a saxophone. He was used to holding his hands at its base to heat them during winter. They said he stayed sitting on the deck of his ship.

In the years 1851 and 1854, Robert Pollock Davison received Master Mariner certificates after 28 years of service. 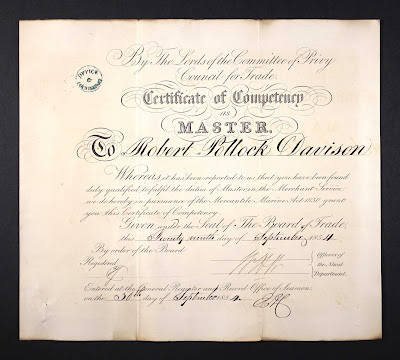 Robert and Ellen had a total of nine children, according to the British census of 1871:

It may be noticed that families had many children at that time, at a rate of one child every two years. It is also interesting how the same names are repeated from father to son and from mother to daughter. So far there were 4 generations of Roberts and 3 generations of Ellens (which increased to 4 in the next generation of Ellen Isabella family).

I would like to know descendents of my great grandfather Percy siblings. I know that William Humble married Marian Boyce and had a son called William Richard. I know also that Ellen Isabella married Samuel Cole Love and had 10 children: Joseph, Ellen, Samuel, Sydney, Florence, Agnes, Frances, William, Arthur and Hilda.

Robert and Ellen's child was born in Ireland, two years after the marriage in England at the time that the Irish father of Ellen died (1838). They returned to Stepney in 1841, when the second child was born. From then, Ellen's mother followed the family as seen in the British censuses.

They lived in this address in 1842, as can be seen in the baptism of Thomas James Allen Davison:
27 Luke Street, London

In 1851 the whole family, including grandmother Ellen Sandes, lived at the following address according to the British census of 1851:
15 Stepney Causeway, Stepney, Middlesex

The house was a 10 minute walk away from Saint Dunstan Church, where most of the children was baptized.

Stepney is a district on the east side of London. The family settled in Stepney for several years. 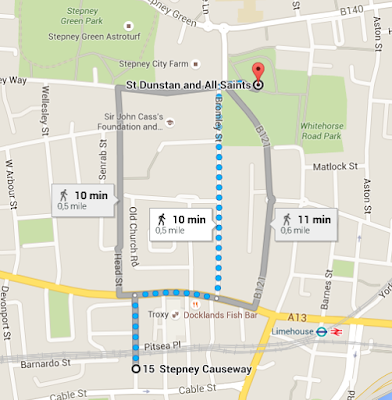 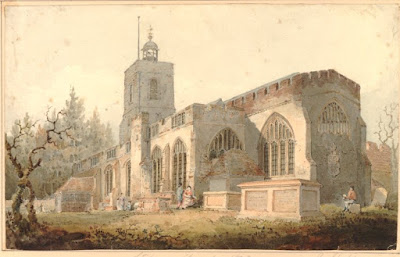 Church of Saint Dunstan in 1804

According to the British census of 1861 1, the family moved to the address:
2 Regent Terrace, Stepney, Middlesex

At this time the head of the family was Ellen Davison. She lived with her mother and her six youngest children. Her mother died in 1871.

On that date, according to the census of 1871, they lived in:
8 Spurstowe Road, Hackney

More information?
If you have any queries or information to add, please e-mail me at
joaocarlosdavison@yahoo.com.br
or post a comment below.